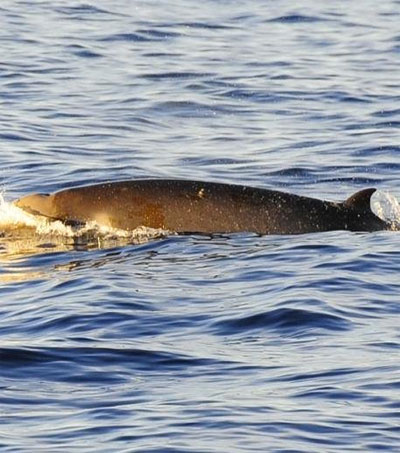 For the first time in New Zealand waters an extremely rare grouping of Shepherd’s Beaked Whales, one of the least known cetaceans in the world, has been spotted from a University of Otago research vessel off the coast of Dunedin.

Dr Will Rayment, from Otago’s Department of Marine Science, led a survey expedition of the submarine canyons off the Otago coast aboard the vessel Polaris II, and revealed the two separate sightings of the whale.

The Shepherd’s Beaked Whale, Tasmacetus shepherdii, was previously known from only nine confirmed sightings in the world of live members of the species, and 55 strandings of dead whales.

“There have previously been no confirmed sightings in New Zealand waters, although New Zealand is the world’s stranding hotspot for the species,” Rayment says.

“Although we suspected that the Otago Canyons would be good habitat for deep diving odontocetes such as sperm whales and beaked whales, nobody had really been out to have a proper look.”

“We were delighted that our suspicions were confirmed, and to make two sightings of these whales is really exciting. The species is very rarely sighted, and we saw two groups in two days. It shows that the Otago coast and the canyons just offshore is very important habitat for marine mammals.”