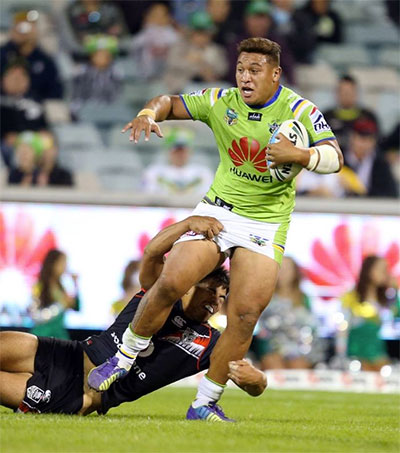 Auckland-born Raiders enforcer, the “revitalised” Josh Papalii, 23, credits some tough love from coach Ricky Stuart as the key to turning his fortunes around.

After a sluggish start to the NRL season when he questioned his place in first-grade, Papalii has now been earmarked as Queensland’s punisher for the State of Origin series decider at Suncorp Stadium on 8 July.

Papalii’s big hits have become the stuff of YouTube legend.

He laid out Broncos forward Josh McGuire with a massive shot this season, while the staff at Brookvale Oval are still picking pieces of Jamie Buhrer out of the ground after his devastating tackle on the Manly second-rower a couple of years ago.

Papalii was on the verge of throwing in the towel before Stuart cracked the whip and got him back in shape.

It’s been a meteoric rise for the New Zealand-born Kangaroos international.

A first-grade debut with the Raiders in 2011 as an 18-year-old, Papalii was thrust into the Origin arena for game two of the 2013 series.

He earned his first Kangaroos jersey later that year, coming off the interchange bench in the victorious World Cup final against New Zealand.

“In footy, you have a character and you have to live up to that character,” Papalii says. “Mine sometimes doesn’t come out being the nice guy. That works for me.”