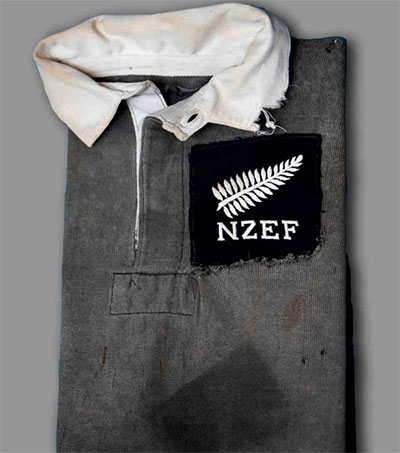 A forgotten post-war New Zealand rugby jersey found among old artefacts at a Welsh clubhouse has provided a massive financial boost to the side, which is run on a shoestring, according to Wales Online.

Officials at the Swansea Valley club Ystalyfera RFC found they had a piece of rich sporting history on their hands after discovering it belonged to the New Zealand Expeditionary Force rugby team – known to many as the Kiwis.

Chairman Alun Davies said the club sold the shirt at auction for £7500 – more than 10 per cent of its annual £70,000 turnover – after it was unearthed during renovation work last summer.

Formed immediately after the Second World War, the New Zealand Expeditionary Force team was made up from soldiers and prisoners of war camps who had spent six years on the battlefields of Europe.

Selection for the squad was based on an interview process conducted in 1945 in Italy and Egypt for all those who thought they had a chance of making the side.

Eventually 31 of the 396 soldiers who put their names forward made the team.

Davies said: “It was a wrench [to sell the shirt] but at the end of the day to help sustain the rugby club and the future of the club it’s a matter of having to sell it really.”