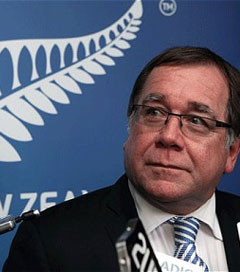 New Zealand will help improve food security for the Gulf Cooperation Countries (GCC) and particularly the UAE, Murray McCully, New Zealand Minister of Foreign Affairs said in a special interview with Gulf News. “New Zealand’s background and long history of agriculture production and technology will be invested to serve the interest of the food security programme not only in the UAE but the GCC countries as well.” During his visit to the UAE Minister McCully met with Shaikh Abdullah Bin Zayed Al Nahyan, UAE Minister of Foreign Affairs and discussed key issues to enhance bilateral relations between the two countries. “New Zealand will assist the UAE in the food security by increasing exports to the UAE, developing agriculture and irrigation system as well as putting the right technology in place”, Minister McCully said. The overall value of the bilateral trade between the GCC and New Zealand reached $5 billion in 2012, the minister said. Minister McCully said that while New Zealand is well known as a food and beverage exporter, “increasingly our exports to the Gulf region are diversifying to include ICT (information and communication technology), education and consultancy, and specialised manufacturing”.