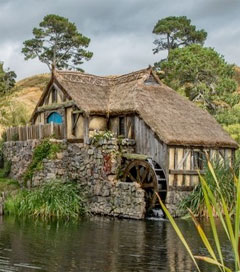 North to South Through the Hobbit’s Stomping Ground

To take a walk in the footsteps of The Hobbit, the Huffington Post has published a guide to many of the locations where scenes from the movies were filmed, and where with the convenience of movie-themed tours, it’s easy to visit the same outposts where dwarves and trolls once voyaged.

At Piopio and the Mangaotaki Rocks in the Waikato, the famous site of Trollshaw Forest was filmed. “At an area known as Denize Bluffs, huge shafts of rock plunge upwards from the forest and make the perfect setting for a secretive hideaway.”

In the South Island, an hour west of the Marlborough vineyards, “Pelorus River is the only site in New Zealand where a collection of dwarves have rafted a river in wine barrels.”

The Post also recommends a trip around Twizel and the Mount Cook area, where the “expansive plains were the dramatic setting for many battles and panoramic vistas … [T]he turquoise-infused Lake Pukaki was the setting for Laketown – the city which is featured in The Desolation of Smaug.”