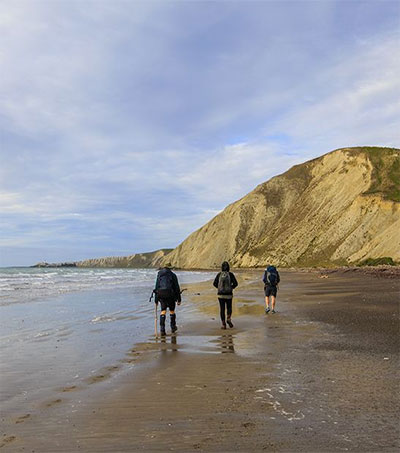 The North and South Islands are moving closer together after a series of earthquakes in 2016 that lifted the sea floor, GNS Science has said.

Over about a minute-and-a-half, parts of the Marlborough coast were lifted more than 6m in places and dropped more than 2m in others. The 7.8-magnitude quake and its aftershocks lifted the seabed exposing seaweed-covered rocks and marine life. And the islands have continued to creep closer to each other since the quake, geodetic scientist Dr Sigrún Hreinsdóttir from GNS Science told Stuff.

Cape Campbell, on the northeastern tip of the South Island, is almost 35cm closer to Wellington, a major city on the southern coast of the North Island, than it was before the quake, Hreinsdóttir said.

Meanwhile, Kaikōura has moved about 15cm east, and Blenheim has shifted northeast by the same distance.

Hreinsdóttir noted that it was difficult to determine which fault was mostly responsible for the movement, saying: “In reality we are having all these creepings going on and the question is, which is the dominant factor?”

GNS Science has monitored geological movements at several sites across New Zealand since the 2016 quake.

That quake dramatically altered the landscape of parts of the South Island and produced 25 fault ruptures, according to the organization, which says it was “one of the most complex earthquakes ever recorded worldwide”.