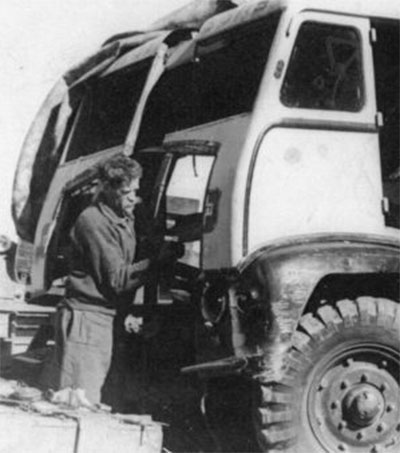 New Zealander Dr Hannah Bulloch is in Scotland to research a book she is writing based on trips her grandfather made to the Isle of Skye. The BBC’s Annabel Maclennan caught up with Bulloch at the Scottish Creative Writing Centre at Moniack Mhor, near Inverness.

Bulloch’s grandfather, Alan MacLeod, grew up hearing stories of his grandparents’ emigration from their home in Skye to New Zealand.

Bulloch said: “They spent three months at sea, and my grandfather wanted to emulate this journey.”

His first chance to visit his ancestral island home came after the end of World War Two in 1945.

He had served as an artilleryman in Italy and after the end of the conflict in Europe he took the chance to travel to Skye.

In 1962, the lure of Skye led MacLeod to build a “house truck” on his family’s farm in Dunedin for a journey undertaken the following year.

He cannibalised parts from various vehicles, including the chassis from a military armoured scout car, the cab from a city bus and a tractor’s engine.

The completed vehicle was later transported by ship to Singapore, before the long drive across Asia and continental Europe.

But one adventure-filled trip to Skye was not enough for the New Zealand Macleods.

Bulloch said: “They repeated the trip in 1967, taking a similar land route.”

But for the return journey, MacLeod finally managed to emulate his grandparents’ journey by sea. “They bought a rusty old fishing trawler in Wales and, using the kids as crew, sailed home to New Zealand.”