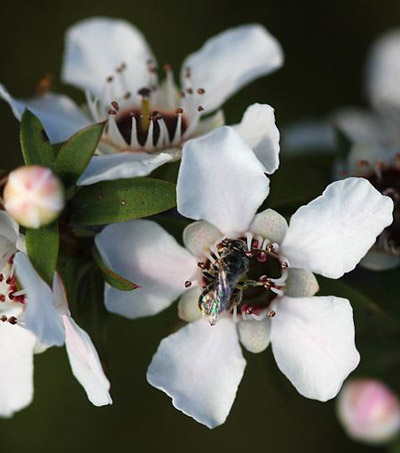 New Zealand, the Kardashians, and the Battle to Control Manuka Honey

“Kourtney Kardashian hawks its health benefits. Counterfeiters and chemists labor to unlock its molecular secrets. And now it’s at the center of an international branding war,” writes Ellen Airhart in an article for WIRED. She is referring to Manūka honey, “a sweet extravagance from New Zealand that sells for a sticky $2.50 an ounce and has attracted a slew of famous fans, led by Kourtney Kardashian who has a promotional contract with the brand and claims Manūka is responsible for her robust health and soft skin.

“Manūka honey has more than just the lure of exclusivity. While there’s no evidence it protects Kardashian from the common cold, Manūka does have useful antibacterial properties,” as reported in the article.

“Most honeys kill some bacteria because they contain peroxide, which eats away at the bugs’ protective cell walls. Manūka honey, by contrast, can attack a bacterium in many ways: disrupting communication, inhibiting movement, and destroying digestive enzymes, as well as breaking down its cell walls. This intricate attack strategy could make Manūka honey more effective against antibiotic-resistant bacteria like MRSA.” “Beyond its antibacterial benefits, Manūka honey (and other honey) has some wound-healing properties.”

With these health benefits and celebrity endorsements, demand for Manūka is growing fast and New Zealand is fighting to keep the coveted brand for itself. “Real Manūka, they say, can only come from New Zealand, which is why that country’s Manūka Honey Appellation Society recently submitted a certification trademark application for the words ‘Manūka Honey’.”

“The active ingredients in the honeys are the same,” says Peter Brooks, an Australian biochemist who currently studies Manūka’s anti-inflammatory properties.

To try to foil the Manūka honey fakers, who mix the Manūka with other honeys, or mislabel the honey altogether, “Kiwi researchers initially tested for a certain amount of a compound associated with the honey’s antibacterial properties: methylglyoxal.”

However, “fraudsters can heat the honey or store it for a long time to artificially turn the available dihydroxyacetone into methylglyoxal,” writes Airhart. In 2014, “a Japanese researcher named Yoji Kato identified a complex compound that isn’t easy to replicate. He called it leptosperin, and it’s now the standard measure for determining whether a honey labeled Manūka is the real thing.”

But Rawcliffe argues “that discrepancies between the soil, light, and weather in Australia and New Zealand make a difference in the quality of the honey—just as they do with wine.” While the trees at the center of the dispute “actually grow in many countries, in all kinds of conditions,” “there are more Manūka trees in Southern Australia and New Zealand than anywhere else.” In New Zealand “indigenous Maori people used the tree to make fence posts, spears, roofing, and even scented toilet oil.”

According to the article “the Unique Manūka Factor Honey Association argues that this cultural and geographical heritage should give Kiwis exclusive rights to the word ‘Manūka’” and “they have lodged an application with the New Zealand Intellectual Property Office for a certification trademark, which would secure the name “Manūka Honey” internationally.”