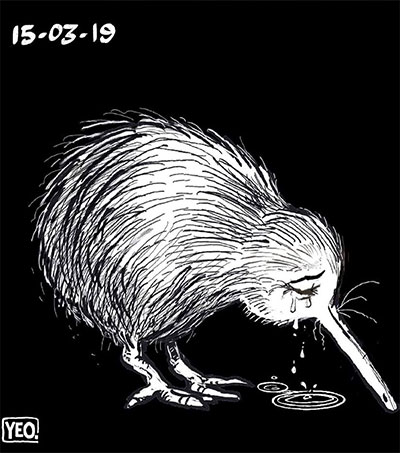 “We’re a long way from anyplace, and that’s the point of New Zealand: We like it like that. We’re lucky here. We’re out of the picture. We’re too distant and obscure for terror cells to bother infiltrating. We’re all good,” New Zealand Herald columnist Steve Braunias writes in an opinion piece published in The New York Times on the day 49 people were shot dead at mosques in Christchurch.

“Except now,” Braunias continues, “we have to reckon with the tragedy and the grief and the awful, deepening shock of the terrorist attack in Christchurch.

“News came slow. At first it was described as multiple shootings, and that sounded bad, very bad, but the mind contained it – surely the figure was less than 10. But then the police confirmed 40 dead. An hour later, 49 dead. And then the survivors began describing the shooting and the victims: ‘One little boy, Somali, maybe 5 years old. He was a very nice boy.’ The bodies in the mosque, waiting to be identified.

“It doesn’t make a lick of sense. This sort of thing – an attack, an armed moron with a mission statement, three accomplices running amok in a flat, romantic city, with its gentle Avon River and its cherry blossom in spring – simply doesn’t belong here.

“When we go about mass killing, we go about it furtively. The Bain family of five, shot at dawn by a deranged family member in Dunedin. David Gray, the lone gunman who shot and killed 13 neighbours in Aramoana. They were New Zealand killings, in the New Zealand manner – seething tensions suddenly unleashed, a mad dog gone wrong. They had recognisable national characteristics.

“But the mosque killings were something new, something off the chart. This was organised, planned, slaughter on a large scale of the innocent, carried out by a killer or killers with a head full of militant trash – the usual rubbish of white supremacy, with its fear and loathing of immigrants.

“But the terrorists weren’t hitting out at some separate, isolated community. Muslims in New Zealand are part of the fabric of everyday life. Prime Minister Jacinda Ardern is at her best when she addresses issues of national identity. She noted in her news conference held to announce the tragedy that many of the victims of the shooting were migrants. ‘They have chosen to make New Zealand their home and it is their home,’ she said. ‘They are us.’ The terrorists killed New Zealanders.”