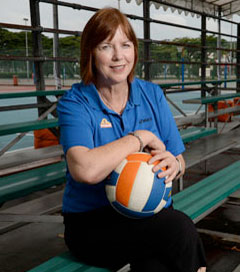 Ruth Aitken is taking up the role of Netball Singapore’s new technical director and national coach. Mastering the pronunciation of her new charges’ names may be tricky for the New Zealander, but she has never been one to shy from a challenge. In fact, the thirst for a new challenge was precisely why Aitken – who has won the netball world championship both as a player and a coach with the Silver Ferns – signed up for the job in Singapore. “I love different challenges. It’s that whole thing about helping others grow and develop, and become the best that they can be,” Aitken, 56, said. New Zealand are the world’s top team. Singapore, the Asian champions, are ranked No 21. Said Aitken, who has been engaged on a two-year contract: “Coaching is all about acknowledging where the individual is, and working out how to take them to the next level. “It’s being aware of the needs of the player, instead of me coming in and saying, ‘This is what we do, now get out and do it.’” Aitken, who holds a Masters in English and had a career as an English teacher before putting on the coaching hat some 33 years ago, believes that Singapore can look beyond just reigning supreme in Asia. “The team’s done incredibly well winning the Asian Championship [last year],” she said. “Good people have been involved in the programme. It’s about me now adding value.” Aitken aims to help the Republic move up by about five rungs within the next year and a half. A longer-term goal would be to inch closer towards being among the world’s top 12 sides in five years’ time. “It certainly won’t happen overnight. It’s about chipping away at it,” she said.