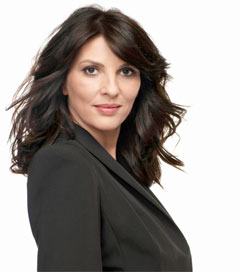 Still’s production stars English actor Adam Godley as a dependable bank clerk who turns his back on everything that he has hitherto been. The trigger is an exotic Italian woman who wants to make a withdrawal. Bellman plays the exotic Italian – among others.

From Morning To Midnight, which runs through 21 December, is Bellman’s first acting job since Leverage ended in 2012.

Working on the 77 one-hour-long episodes of Leverage allowed Bellman the time to “hone my craft, to feel comfortable in the character, and to experiment. It’s taken me a really long time to feel the confidence that Leverage gave me – that feeling of ‘I know what I’m doing’, of nothing being scary any more, and liking the unexpected.”

For her role in Leverage, Bellman, 48, was nominated for a Saturn Award for Best Supporting Actress in Television.