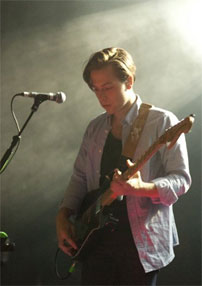 Naked and Famous guitarist and vocalist Thom Powers admits to have been part of several “terrible, terrible bands” in his time. “Everything that was terrible about ‘90s rock music — I did that,” the Auckland-based musician says, sounding a bit embarrassed as he references his defunct metal and hard-rock projects. By the time he helped to form the Naked and Famous in 2007, his creative tastes had changed considerably. Passive Me, Aggressive You, their debut full-length, came out in New Zealand last year and in the States in March this year. The album contains no hints of metal or hard rock; in fact, Powers’ current act drifts between indie rock and electro-pop. Passive Me is a grab bag of musical concepts: synths build bouncy dance-floor melodies; synths go scratchy and angry; clipped beats mingle with a solemn piano; guitars revel in earthy, wide-open choruses. The Naked and Famous are currently on tour in the US ahead of Asian and Australian dates early next year.