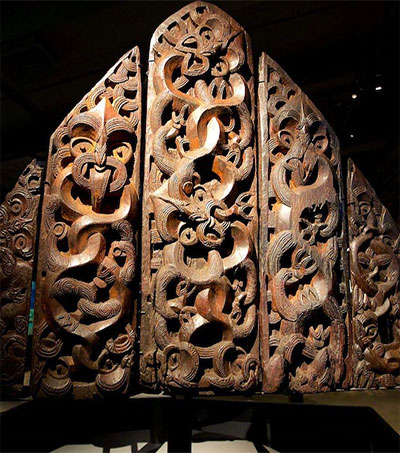 Throughout its reign, the British Empire stole a lot of stuff, Marc Fennell and Simon Leo Brown report for ABC Radio National. Stuff the British Stole podcast is a series about the not-so-polite history behind those objects, and includes a story about the five wooden carvings known as the Motunui epa, which were hidden from marauders in a swamp for over a century, until someone dug them up and took them to Europe.

The epa were made for the back wall of a Taranaki pataka. Historian, archivist and speech-writer Dr Rachel Buchanan says the region is her “spiritual homeland” and the carvings a part of its heritage.

The panels were carved by Te Atiawa artists between 1750 and 1820, and discovered in a swamp in the early 1970s, but then taken out of the country using false papers in 1973 and sold to Geneva-based collector George Ortiz for about $100,000.

After a long legal battle, the epa were returned to New Zealand in 2014 at a cost to the Crown of more $4.5 million and are now permanently displayed at the entrance of New Plymouth’s Puke Ariki museum.