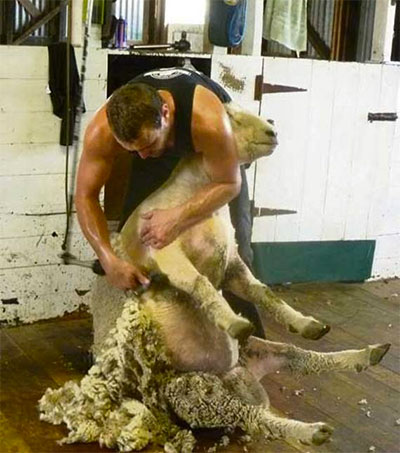 New Zealand-born cutter Matt Smith, 32, has posted a world nine-hour shearing record of 731 ewes in Cornwall. Smith took an average of 44 seconds to shear each sheep on his way to beating the old mark.

This stood at 721 ewes and was set in 2007 by fellow New Zealander Rodney Sutton.

Backed by the British Wool Marketing Board (BWMB), Smith’s marathon effort was the first time a world shearing record had been attempted in the Northern Hemisphere.

“I am chuffed to bits,” Smith said. “It’s been a long-time ambition of mine, and this is proof, that if you’re willing to put your body on the line, you can achieve your goals.”

Smith and his wife Pippa run 1385 breeding ewes – mostly Romneys with some crossed with the Lleyn – on a New Zealand grass system in Launceston, Cornwall.

Smith launched his record bid at the farm at 5am on a Tuesday, shearing for two hours before taking a half-hour break.

He followed this up with four 105-minute sessions runs, each with 30-minute breaks.