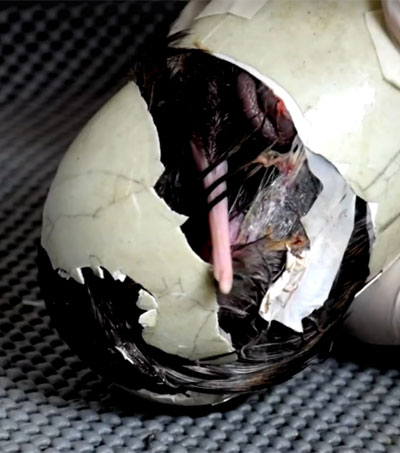 “Using nothing but tape, a fragment of shell and MacGyver-like ingenuity, nature park worker Claire Travers patched up a badly damaged egg sufficiently for the baby kiwi to survive,” as reported in an article on the BBC. “The egg was found by a Department of Conservation worker, who brought it to the Rainbow Springs Nature Park at Rotorua.”

“The shell was broken through to the egg’s internal membrane, splitting it so the membrane had collapsed on top of the chick, which is very dangerous,” said Travers.

“To be honest I didn’t think the chick had any chance of surviving because the hole in the shell was so big, I was absolutely over the moon when it hatched,”  Travers told Radio New Zealand.

“It really gave me a thrill that against all odds we had saved one of our iconic kiwi chicks.”

All five species of kiwi are listed as “threatened” or “at risk” and there are only 68,000 of the birds left in the wild, “a figure declining by approximately 1,000 every year”, according to the Department of Conservation.