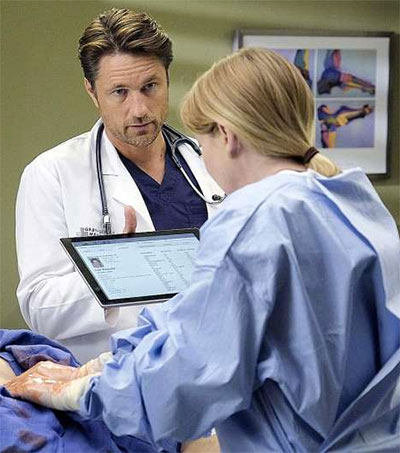 The handsome neurosurgeon Derek Shepherd (Patrick Dempsey) had been dubbed “McDreamy” by female staff, while another dashing doctor – the now also dead Mark Sloan (Eric Dane) – was nicknamed “McSteamy”. So fans have taken to calling Henderson “McKiwi”, in a nod to his Antipodean roots.

Henderson admits he is flattered by this, but is careful to dismiss any suggestion he is somehow usurping Dempsey as the resident hunk on the series.

“First of all, I always felt that what Patrick does, and did, as an actor is so different from what I do,” he tells the Straits Times and other reporters in Los Angeles.

“I didn’t think that my role was in any way to replace him and I don’t think you ever could. So I just sort of laugh that one off a little bit. But, you know, it’s flattering to even be compared to that.”

His experience on Shortland Street, New Zealand’s own hospital drama, helped him adjust to his new role, he says.

“I kind of grew up in New Zealand on that soap, which was in a hospital setting. There was a moment in my first week of filming on Grey’s Anatomy, as I was making my way back through the hallways of this fake hospital, when the realisation came to me that, wow, this is exactly what I was doing 20 years ago.”

Grey’s Anatomy is now in its 12th year.