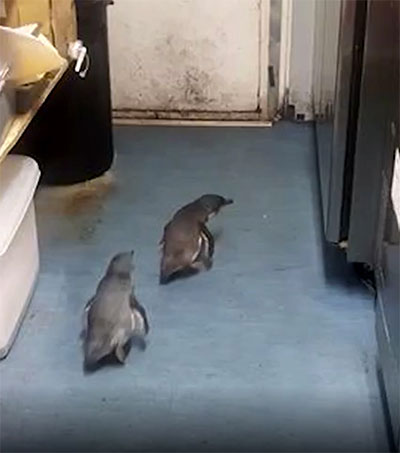 When the police call saying there’s been an arrest at your business, it’s usually cause for concern, CNN correspondent Isabela Espadas Barros Leal writes. The owners of the Sushi Bi restaurant in Wellington, however, were surprised to discover shelter-seeking little blue penguins, or kororā, as their Saturday night intruders.

After being temporarily detained in the early hours of the morning by Constable John Zhu, the penguins were returned to Wellington harbour, only a few blocks away from Sushi Bi, Leal writes.

In a statement posted on their Facebook page, the Wellington District Police wrote: “We received a call about 8:40 p.m. on Saturday night of a penguin on the road in Featherston Street. Police responded and with some help from members of the public released the penguin, described as ‘little and blue’, back into the sea.”

Although the penguins’ pit stop was a happy surprise for the restaurants’ patrons, many of whom were quick to snap a photo, their appearance posed a safety issue.

No one was injured in this instance, but penguins do bite, Leal reports.

For the time being, Wellingtonians are grateful that their sushi-loving blue neighbours have been returned to their home.