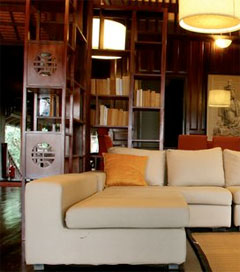 At Home on the Banks of the Mekong

The home of New Zealand doctor Andrew Thomson, who works for the United Nations in Cambodia, features in The New York Times’ section “Great Homes and Destinations” this week. “It was more of a lark than a calculated business move: They wanted a scenic spot to drink beer, watch the sunset and escape their stressful jobs as medical experts in a country just beginning to recover from years of violent conflict,” correspondent Mike Ives writes. “They didn’t plan on building the raised wood-pole house that now stands as a reflection of their friendship. At the time, there were no real estate agencies in Phnom Penh and the country’s land registry system was rudimentary. So the friends, Thomson and Ean Karona, walked the banks of the Mekong River, looking for a farmer who might sell them a plot. Thomson asked his Cambodian friend Ean, a physician’s assistant, how much the land might cost. “Not much” was the reply. Over the next few months, they purchased three plots totalling 4290 square metres of a riverside banana farm in this village that looks west across the Mekong, toward the Royal Palace. In 1993, the UN posted Thomson to Haiti, and later to Rwanda, Bosnia and New York as the years passed. Thomson said that, in the course of his travels, he occasionally forgot that he and Ean owned the land. But in the late 1990s, Thomson and his wife, Suzanne Blanc-Thomson (they had met in Rwanda), decided to move to Cambodia from the United States. When he took his wife for her first visit, the Mekong’s banks had just overflowed. Fish were swimming through the yard and when Blanc-Thomson leaned on a tree trunk she was attacked by a colony of red ants. ‘Darling, this is where we’re going to build our dream house,’ Thomson said. ‘You’re mad,’ Blanc-Thomson said, according to her husband. The house now has a modern kitchen and a swimming pool. In 2010, builders installed a ground-level apartment that is now rented by Nathalie Parize, a French hotelier who lives there with her partner and three children. And Thomson, who is entering architecture school this autumn in Geneva, is drafting plans to convert the entire house into the reception area and restaurant for luxury hotel rooms.”