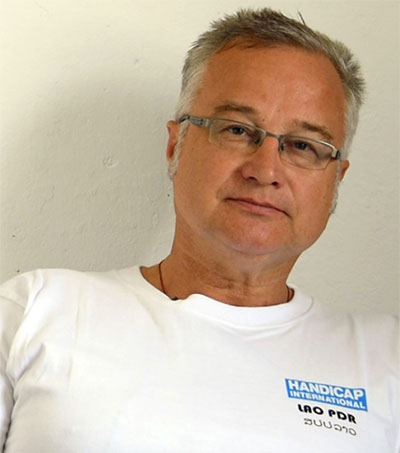 Per capita, Laos boasts the inglorious distinction of being the most heavily bombed nation in the world. Between 1964 and 1973, more than two million tonnes of ordnance was dropped on the country in roughly 580,000 sorties: more bombs than fell on all of Europe during the Second World War. New Zealander Leonard Kaminski is the chief of operations for Handicap International’s (HI) demining outfit in Xepon. Kaminski talks with the Toronto Star about the lasting legacy of the war on Laos.

Nestled against the Vietnamese border, Xepon sat smack dab in the middle of it all. When it comes to UXO, the district is arguably the most heavily contaminated area in the world.

One of five humanitarian demining outfits operating in Laos, the French NGO Kaminski works for has been clearing ground in the country since 2006. Kaminski has been working with UXO since his country’s army deployed him to neighbouring Cambodia in 1991 to clear landmines.

HI’s compound in Xepon’s main town is ringed with the hulking steel shells of disarmed US bombs. Inside, Kaminski shows off oxidised examples of the types of cluster submunitions that were used during the war. Some were designed to release trip wires, others to camouflage in foliage, while some were armed as they spun like maple seed helicoptering to the earth. Kaminski calls the country a “testing ground.” But the most common submunition, he says, was the BLU-26. A single cluster bomb casing could hold more than 600 of these shrapnel-packed, softball-sized bombies and distribute them over an area the size of a football field.

The country will never be fully cleared, Kaminski says. With four decades of jungle growth cloaking UXO in the Laos’ mountainous east, demining wilderness areas would both be difficult and environmentally damaging. And in this region where ancient animistic beliefs melt into the temporal universe, some communities fear that further detonations would upset the spirit world.

“We won’t do those areas as a priority,” Kaminski says of the region’s taboo “Spirit Forests.” “People don’t go into them anyways.”