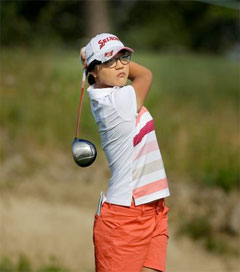 New Zealander Lydia Ko, 16, has received the McCormack Medal as the world’s leading women amateur for a third straight year, which was presented to her by the Royal & Ancient and United States Golf Association.

Ko successfully defended the Canadian Women’s Open title on the US LPGA Tour then finished runner-up at the Evian Championship, the year’s last major. Other highlights include a tie for third in the Australian Women’s Open, and tie for 17th in the LPGA Championship.

On GolfChannel.com Ko’s mother Tina Hyon has been reported as saying Ko will play as a professional next month. The website said Ko will play the LPGA tour’s season ending CME Group Titleholders in Naples and that she is also considering a place in the Lorena Ochoa Invitational in Mexico the week previous.

“If she plays any pro events now, she will play as a pro,” Hyon wrote to GolfChannel.com in an email.

Ko was born is Seoul. She lives in Auckland and is a student at Pinehurst School in Albany.