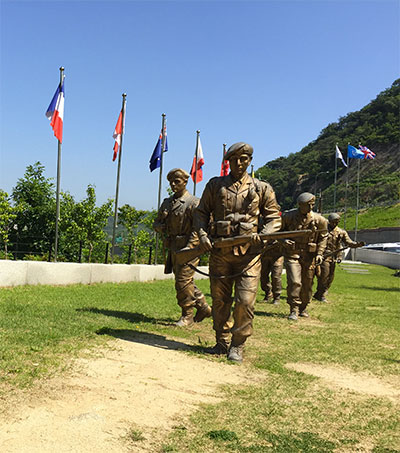 Snapshots of the 1950s are seared into veterans’ memories: South Korea then was an economic basket case, a devastated land of burned-down villages, desperate poverty and denuded hills. Andrew Salmon from the Asia Times talks to vets of the Korean conflict, including New Zealander Arnold Hayman, who return to the battlefield every year to see how the land they defended from 1950-53 has repaid their sacrifices and made good.

Every year they return to South Korea. Every year, they are fewer in number, Salmon writes. The ravages of time are winnowing the ranks of Korean War veterans far more effectively than any North Korean bullet or Chinese hand grenade.

Fading survivors of the national contingents from the 16 nations that made up the US-led UN Command come at different times of the year to visit different battlefields. On a recent sunny afternoon, a dozen Commonwealth veterans visited the former killing grounds at Solma-ri, just south of the strategic Imjin River. Here, the memorial to the British troops who – after the US, made up the second largest group in the UNC – stands.

The memorial commemorates the Gloster Battalion. In April 1951 the unit was surrounded at the epicentre of the biggest Chinese offensive of the war – a massive attack which the Korean Institute of Military History has dubbed, due to its staggering scale, “The Armageddon North of Seoul.” Outnumbered nine to one, the Gloster fought for three days and nights. Their hilltop strongpoints were overrun, one by one. The constricted unit was finally annihilated after a last stand on the napalm-seared summit of Hill 235 – today, known as Gloster Hill.

“When we arrived, you could see the pitiable condition of the [South Korean] people,” said Hayman, an artillery veteran. “But what was striking was their resilience – their sheer bloody stubbornness.”

Today, that hard-working people have built a new nation. South Korea’s is now the world’s 11th largest economy, boasting a high-tech infrastructure, global brands, a vibrant democracy and a self-confident swagger. Yet its people still exhibit enormous gratitude toward the old soldiers.

“I really am moved by the generosity and the kindness,” Hayman said. The receptions veterans and their family members receive from locals is overwhelming.”