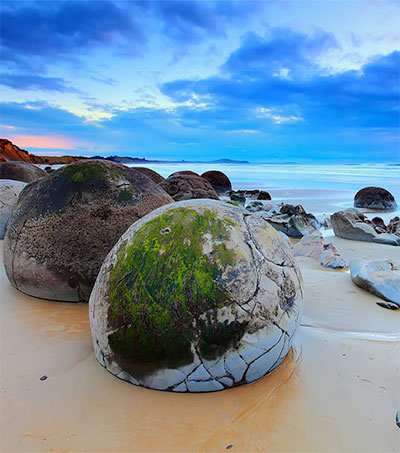 Koekohe Beach One of the Most Bizarre in the World

Koekohe Beach in Otago, famed for the Moeraki Boulders, is one of the world’s most bizarre beaches according to the Architecture and Design website, which also features the Beach of the Cathedrals, Ribadeo, Spain and a Californian beach covered in glass.

The boulders are “grey-coloured septarian concretions,” according to Wikipedia, “which have been exhumed from the mudstone enclosing them and concentrated on the beach by coastal erosion.”

“The larger boulders, 2 metres in diameter, are estimated to have taken 4 to 5.5 million years to grow.

“Maori legends explained the boulders as the remains of eel baskets, calabashes, and kumara washed ashore from the wreck of Arai Te Uru, a large sailing canoe. This legend tells of the rocky shoals that extend seaward from Shag Point as being the petrified hull of this wreck and a nearby rocky promontory as being the body of the canoe’s captain.”