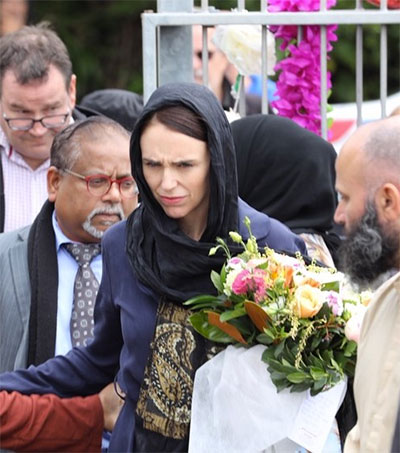 The Fortune magazine’s sixth annual leaders list “is the home of the brave”. “These thinkers, speakers, and doers [including New Zealand Prime Minister Jacinda Ardern] make bold choices and take big risks – and move others to do the same,” Geoff Colvin writes for the publication.

Ardern comes in near the very top, ranked at No 2 on the list.

“Reading about these 50 extremely hardy people will improve your day and perhaps do much more. In an increasingly angry world, they’ll give you hope,” Colvin writes. “You’ll be surprised by their ingenuity in devising ways to do good. Above all, when you find yourself reluctant to dare greatly, let them inspire you with their titanium-strength courage.

“Ardern had already broken new ground as a pregnant woman – and then a new mother – leading a nation. And this year, the 38-year-old prime minister showed the world her fullness as a leader as she deftly, empathetically, and humbly navigated New Zealand through the worst terror attack in its history, after 50 were killed at two mosques in Christchurch in March,” Fortune writes.

“Rallying people behind the theme ‘We are one,” she channeled the country’s – and Muslim community’s – grief as she opened speeches with Arabic greetings and quietly wore a headscarf. She set a standard for dignity in the face of violence by refusing to speak the attacker’s name. And she won near-unanimous support for a ban on semiautomatic weapons of the kind used in the attack. Future leaders can look to Ardern for a master class in how to guide a country through a crisis.”

The co-founders of the Gates Foundation, Bill and Melinda Gates came in at No 1, while American special counsel, Robert Mueller took third spot.