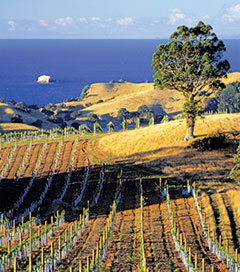 “Waiheke Island is now the go-to holiday home destination for wealthy New Zealand urbanites … with the west coast draw[ing] the most punters, in particular the beaches near the island’s main town Oneroa and at Onetangi, its largest and arguably most beautiful beach,” the Financial Times reports in a property feature.

“Investor Graeme Hart, the country’s richest man, owns a property here – as does former All Blacks rugby coach Sir Graham Henry. In the past year alone, prices have risen by about 10 per cent, says Brad Roebuck of real estate firm Bayleys.

“Barfoot & Thompson is selling a Mediterranean-style villa at Onetangi, at a guide price of $1.95m with four bedrooms, olive groves, a small vineyard and a small orchard producing many fruits including the local feijoa or pineapple guava.

“The most expensive house for sale on Waiheke at present is a $7.5m four-bedroom modern property, with a solar-heated infinity pool, at Oneroa

“Paul Tostevin, an associate in residential research at property specialists Savills, attributes Waiheke’s success with local buyers to the growing wealth across the bay.

“‘Inevitably, when wealth is created,’ Tostevin says, ‘playgrounds for the wealthy spring up nearby. International interest is the likely offshoot in the long term, despite the remoteness of Waiheke.'”