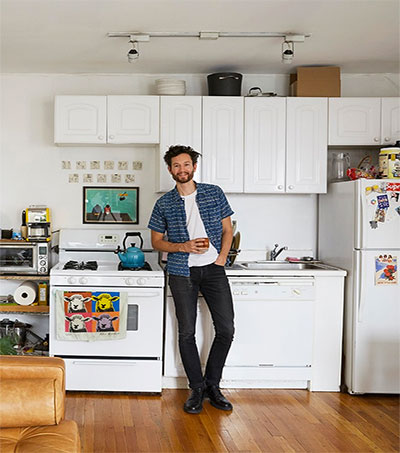 New York resident, New Zealand-born DJ and influencer Isaac Hindin-Miller, of the Isaac Likes blog, has been a fixture in the fashion world for nearly a decade, working for top menswear brands and writing for publications like the Business of Fashion, Man Repeller, and GQ. He opens his home – a “bright and airy top-floor escape outfitted with soft-hued Mid-century modern furniture” and sheepskin – to NYC real estate and architecture news site 6sqft.

In 2015, Hindin-Miller’s roommate left their apartment on Avenue D in Alphabet City, and instead of hunting for another body to fill the space, Hindin-Miller jumped on the opportunity to turn the two-bedroom into an Instagram-ready home.

“[Originally] everything in the apartment was red, brown, and green,” Hindin-Miller says.

“The first thing I did was get rid of the TV, throw out the old lamps and side tables, and change the cushion covers on the couch – there used to be about 24 cushions on each couch, no joke – then I changed the rug, I bought new couches, a dining table, and the pink Eames dining chairs. Oh and art. Lots and lots of art. I got addicted to getting stuff framed. And plants.”

Hindin-Miller’s favourite thing about the apartment is the amount of light and his Ligne Roset Togo couch.

“Because it’s a top floor corner apartment with an empty lot next to it I get light on the north, east and south sides … I [also] love the Matisse prints I’ve got, I love my Richard Haines prints, I love the beautiful naked ladies by Ria Leigh, and I love my sheepskin.”

Hindin-Miller is currently working on a solo album.

Originally from Auckland, he has lived in New York since 2011.