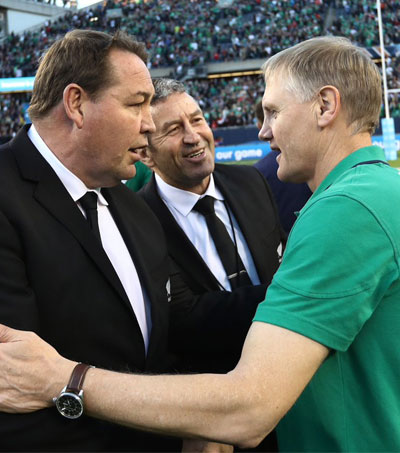 It was “a great result for Ireland. And an even better one for New Zealand,” writes Mick Cleary for the Telegraph after Ireland beat the New Zealand All Blacks 40 to 29.

“You cannot beat the All Blacks by sheer willpower alone. There has to be far more cerebral input than that. Joe Schmidt knows that better than any, reared in the land of the rugby-imbued Kiwi, a thinker first and foremost, but a fighter too,” writes Cleary, who describes the Irish performance as “wonderful”.

“There was intellectual muscle involved in Ireland’s win, their first glorious trumping of the silver fern in 111 years.”

“Ireland did not buckle when the All Blacks came at them in the second half, coming off the ropes after Ireland led 30-8”. They “stayed true to their game and finished the stronger, with a rock-solid scrum, a textbook No 8 pickup from Jamie Heaslip and a try from impressive centre, Robbie Henshaw.”

“Schmidt’s side scored five tries, amassing 40 points. It was only the fifth time in New Zealand’s history that they have been so breached,” as reported in the article.

“This result has to mean as much to Ireland in terms of the standards they now have to meet every time they pull on the jersey as it surely will to New Zealand. The All Blacks will be coming after them. And Ireland have to show that it was not a one-off,” writes Cleary.

Tags: All Blacks  Ireland  Telegraph (The)