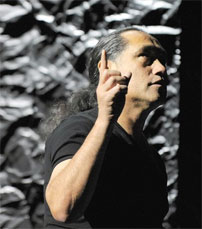 Inviting Gods Into the Theatre

“With a stunning combination of ceremony, ritual, dance and theatre, [Auckland-based Lemi Ponifasio’s] forceful [Tempest: Without a Body],” will have its US premiere this week at the downtown Los Angeles’ Million Dollar Theater. Samoan choreographer Ponifasio calls Tempest “a theatrical meditation on life after 9/11.” “I invite the gods into the theatre,” Ponifasio says. ‘I wanted to add another dimension. It’s necessary now; we’re living in dangerous times.’ Mark Murphy, executive director of REDCAT, has wanted to bring Ponifasio’s work to Los Angeles for some time. “We thought the historic Million Dollar Theater would be a gorgeous setting for the beautiful stagecraft and epic scale of Lemi’s work,” Murphy says. “And we felt it was important for artists and audiences to see it as grandly presented as it has been in opera houses all over the world. He deals with urgent issues in a highly poetic way, going far beyond what you usually encounter in theatre or dance and crosses all boundaries.”