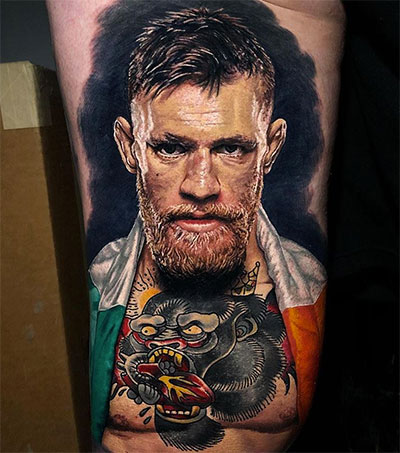 Butcher spent 12 hours on the eerily lifelike tat on a UFC fan that shows a bare-chested McGregor draped in the tricolour.

The creation took all Butcher’s attention with the tattooist using a high-resolution photo of the Dubliner to get him down to the last bristle of his beard.

“Most of those portraits take about 10-to-12 hours, so it’s hard for the customer to sit there for that long.

“But I’m pretty gentle, so they seem to last the time.”

The trickiest element for Butcher was recreating McGregor’s own ink – the unmistakable regal gorilla on his chest.

“It was difficult, because I’m a realistic tattoo artist,” Butcher said. “So when I have to do traditional tattoos that are on someone’s chest, it’s like, ‘Man, this is not my style’, so it’s kind of scary.”

Butcher is known for his tattoos of sports stars, including depictions of Kobe Bryant and Nate Diaz.

Butcher is a graduate of Whitecliffe’s College of Art & Design.