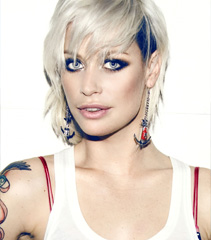 In vogue in Sydney

18 December 2008 – Auckland songstress Gin Wigmore, 22, has been named one of ten best up-and-coming musical acts in the Metro section of The Sydney Morning Herald. Wigmore is fairly confident she’s the only blonde-haired, blue-eyed artist ever to sign to Motown, home of Marvin Gaye, Stevie Wonder and Diana Ross. “It is a bit weird being a little blondie on a black label,” says the singer-songwriter, who moved to Sydney 18 months ago. “My music at the moment is just a mash-up of stuff, with a gospel vibe, a Blondie vibe and crazy instruments like ukulele and mellotron,” says Wigmore, who last week flew out to Britain and the US to meet potential producers for her debut album, set to be recorded in February and March.