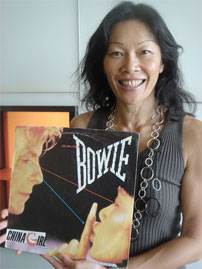 In the Mood for China Girl

The Guardian recommends David Bowie’s China Girl video, featuring New Zealand model Geeling Ng, as one of seven music video recommendations “for every mood.” “Ng plays the China girl in scenes that toy with Oriental stereotypes, juxtaposed with bits where she and a blond Bowie flirt weirdly,” Adam Buxton writes. “In 2012 the standout moment is Bowie pulling back the corners of his eyes in a pre-PC parody of a Chinese face. In a video featuring more overtly political imagery (Geeling running through the desert in cultural revolutionary garb; David loosening his tie angrily then tossing a bowl of rice in the air in slow motion) it’s this gesture of playful offence that ends up saying the most somehow.” Ng hosted the cooking segment for TV One’s 2011 series Asia Downunder.