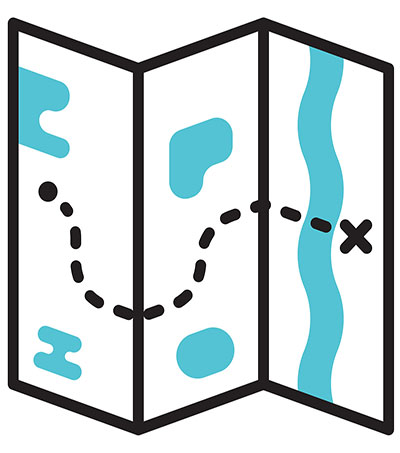 How to Ford a River

The New York Times asks retired firefighter, New Zealander George Spearing, who has crossed hundreds of rivers on solo wilderness treks, including a five-month, 4265km hike from the Mexican border to British Columbia and a six-week journey along the Welsh coastline, how to ford a river.

“Even relatively shallow water can knock you off your feet,” Spearing says. “Each time I cross a river, the power of water amazes me,” he says.

If water obstructs your path, first spend some time watching it. Explore the edge. Throw a stick in. If the floating stick moves faster than you can walk, find a wider, shallower crossing where the current is slower. Always look downstream for hazards. “If you fall in, you don’t want to go over a rapid or a waterfall,” Spearing says.

Rivers rise and fall. Conditions change rapidly. If you’re stymied by a crossing, consider waiting to see if the water drops. Streams and rivers fed by snowmelt will be lowest in the early morning. Whatever you do, don’t be cavalier. Spearing calls water crossings “the No. 1 hazard,” a danger familiar to New Zealanders. The country’s swollen rivers pulled under so many early European settlers that by the 1870s, drowning was known as “the New Zealand death.” Spearing knows those waters well, having crossed many rivers when he once hiked the length of the North Island, about 829km, in 73 days.

Once you’ve found the right spot, keep your shoes on. Unbuckle your pack: should you fall in, you’ll need to wriggle free of it. Find a sturdy, five-to-six-foot-long branch and use it and your two feet to make a tripod of yourself. Always keep two points of contact on the ground. Face upstream and slowly sidestep into the water, leaning slightly into the current and using your pole for support. Move slowly, gauging the flow and depth as you go.

Be particularly careful if the water rises above your knees. “If it starts getting too deep, back out,” Spearing says. Despite your inevitable desire to press on, you may need to wait a day, walk a mile upstream or even turn around. “You’re not invincible,” Spearing says. “Remember that.”

Spearing recounts his Pacific Crest Trail adventure in Dances with Marmots, published in 2005.