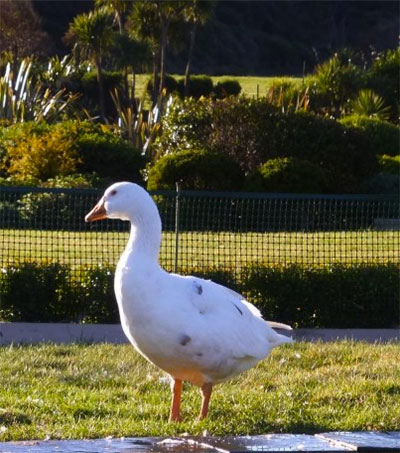 A memorial was recently held for Thomas the goose, a “New Zealander who spent most of his life as a loving partner, caring father and an icon of the LGBT community”, Yvette Tan writes in a story for the BBC.

Thomas the goose died on 6 February at almost 40 years old and is buried beside his partner.

“Thomas has been such an iconic and well-loved bird,” said Craig Shepherd, who runs the Wellington Bird Rehabilitation Trust where Thomas spent his last years. “It’s lovely that he is going to be buried where he spent most of his life.”

But how exactly did a goose end up an icon?

It all started around 1990 when a black swan named Henrietta flew in to the Waimanu lagoon, located in a small town on the Kapiti Coast.

Due to a damaged wing, she was unable to fly with the other swans and was often alone until a few years later when a white goose named Thomas arrived. The duo quickly formed a bond and Thomas was very protective of Henrietta, even scaring off any humans or dogs that came near her.

But after 18 blissful years together, a new young female swan entered the equation and was often spotted with Henrietta. No one thought much of it, assuming that they were both females.

The shocker came when the new swan laid an egg. It turned out that Henrietta was in fact a male swan who had mated with the new female swan.

“It’s very hard to establish the gender of mature black swans,” said Michael Peryer, the tour guide at the Waikanae Estuary where the lagoon is located. “So it turned out in fact that Thomas and Henrietta – who was really a Henry – had 18 happy gay years together.”

Henrietta was re-named Henry, and the new young swan was given the name Henrietta.

Henry and Henrietta went on to have 68 cygnets over the next six years.

Thomas decided to stick around with the duo where he played the role of a doting uncle, helping raise the swans, teaching them how to fly and taking care of them when their parents did not.

“It’s so unusual to have two different species combining so intimately to raise a species,” Peryer added.

According to Peryer, it is not uncommon for geese to be bisexual, though he adds that the duo was the only pair in the Waikanae Estuary to mate with the same sex.