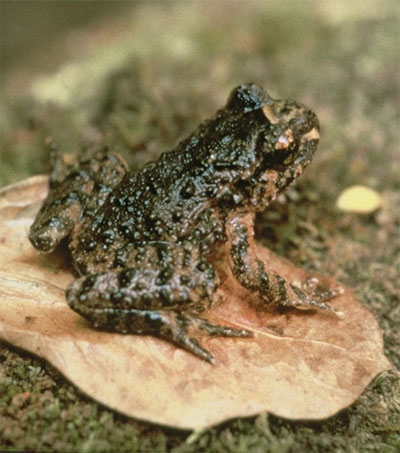 New Zealand has declared the natural habitat of the very rare Hochstetter’s frog to be a conservation sanctuary, giving the tiny creature a chance to recover its numbers in a 400ha area of land located near Te Puke.

The sanctuary includes a former quarry, head waters and basin, and is home to about 200 Hochstetter’s frogs. Carole Long of Forest & Bird told Radio New Zealand that she was present when walkers came across the first frog of the local colony 24 years ago, and described the species as not only “very ancient” but also quite different to almost all other modern frogs.

“They split off from other frog species around the time of the dinosaurs. They don’t croak, they have no external ears, and they give birth to tiny frogs, instead of tadpoles, and they carry them around on their backs,” Long said, adding that the Te Puke Hochstetter’s population was “genetically unique” to the area.

Forest & Bird says it has campaigned for 20 years to have the area declared a sanctuary, in the face of some landowner opposition. Long told News Talk ZB radio that the change in land status from “stewardship” to sanctuary gives the area protection from being developed.

The colony near Te Puke is on the country’s “nationally-critical” list, which is just one step away from extinction, according to Forest & Bird’s Central North Island conservation manager Al Fleming.

“We now have an opportunity to restore the frogs’ habitat, protect them from predators and guarantee their future. These special animals have been around for a very long time,” Fleming says.