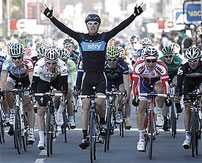 Professional cyclist Dunedin-born Greg Henderson won the second stage of the Paris-Nice cycling race in Amilly, France, on March 7, outsprinting Australia’s Matthew Goss and Russia’s Denis Galimzyanov. “It was a very fast sprint at the end of a very tiring and nervy day,” Henderson said. “The next stage? I’m going to try and go after the yellow jersey,” said Henderson, who is second in the overall standings and just 4 seconds shy of Thomas de Gendt of Belgium’s Vacansoleil.