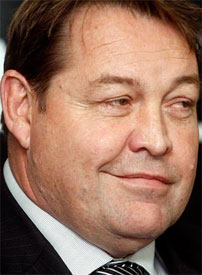 The New Zealand Rugby Union have appointed 52-year-old former policeman Steve Hansen as their new coach, replacing Graham Henry who stepped down after winning the World Cup. Dunedin-born Hansen was widely tipped to get the prestigious role after serving as Henry’s assistant for the past eight years. Making the announcement, New Zealand Rugby Union (NZRU) chairman Mike Eagle said having a World Cup-winning coach involved in leading the team forward was a huge advantage and allowed for a seamless transition. “He has huge respect and backing from the team and his peers and is the right man to now lead the team,” Eagle said. Hansen, who has been awarded a two-year contract, said he was proud to have been given the job. “In this sport it’s the greatest honour you can receive,” Hansen told reporters at NZRU headquarters. Hansen was the Welsh national rugby team’s head coach from 2002-2004.