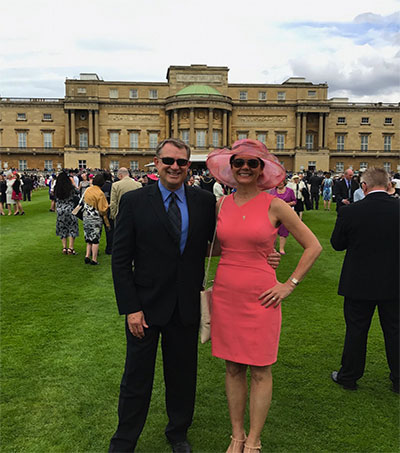 Greg Agnew Invited to Tea With the Queen

Los Angeles-based New Zealander Greg Agnew found a loophole that he says got him an invite to one of the most exclusive events in London – a garden party with the Queen, Prince Philip, Kate, and Will at Buckingham Palace.

Agnew, 56, an investor in companies like Apple, Google, and Facebook and a former journalist, said: “I discovered this strange little loophole that I think was created in Queen Victoria’s time.

“Anyone with a New Zealand passport can simply request an invitation. I did that and they said yes. It was that simple.”

Agnew and his wife Nicole, an American citizen, travelled to London for the event. Nicole was Agnew’s plus one.

On the day of the party, they went to New Zealand House in Trafalgar Square, showed their passports, and were given their tickets.

“For British people, it would have been more difficult to get in,” he said. “There are all of these laws over the years and nobody ever moves them, they still exist.”

He called the party “the experience of a lifetime.”

“I was extremely impressed,” he said. “I loved the fact that especially in this time of high security they gave us absolute freedom. We felt very welcome and as if it was their pleasure to have us all there.”