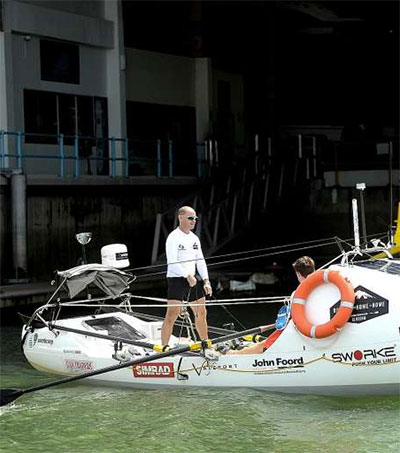 New Zealander Grant Rawlinson, 42, has embarked on a 12,000km rowing and cycling journey from Singapore to New Zealand.

On 3 January, Rawlinson, a Singapore permanent resident, set off on the trip to span almost a year aptly titled “Rowing from Home to Home”.

Rawlinson will attempt to row his $120,000 Ocean Rowing Boat 4500km from Singapore, through the Indonesian archipelago and across to Darwin in Australia’s Northern Territory. He will then cycle 4500km south-eastwards to Coffs Harbour in New South Wales, while the boat will be shipped to the end of the cycling stage.

He will then row another 3000km across the Tasman Sea to New Plymouth. “From there, it’s just a 40km cycle back to my parents’ house in Stratford,” Rawlinson said. “Hopefully I’ll be home in time for Christmas.”

The physical toll will be immense. During the first leg from Singapore to Australia, both Rawlinson and teammate, 26-year-old Englishman Charlie Smith, will alternate one- to two-hour shifts, rowing non-stop for weeks. One will rest in the narrow cabin while the other drives the 750kg (including supplies) fibreglass vessel forward.

Rawlinson added: “No one to my knowledge has tried rowing this route before, so there are a lot of unknowns. There are no log books to reference and it’s taken years of research to plan this entire trip.”

Improbable as his goal may sound, Rawlinson, who quit his job as a regional sales manager to focus on this trip, betrays little in terms of doubt. After all, more than a decade of climbing mountains around the world – he scaled Mount Everest in 2012 – has taught him that no peak cannot be reached.

The former Singapore national rugby sevens player said: “Doing this is really about the journey and not the destination. I believe we are all capable of great things if we are willing to push our limits.”