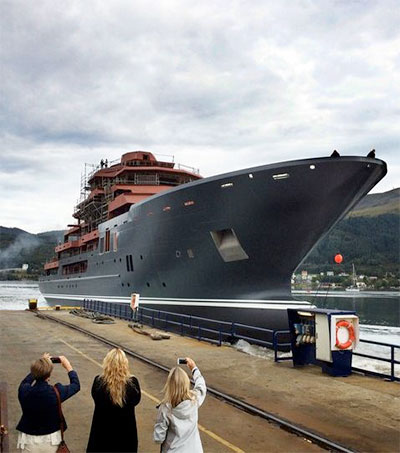 New Zealand billionaire Graeme Hart has been revealed as the owner of the $77 million 107m super yacht “Ulysses”, just launched from a slip in Ulsteinvik, Norway.

The former tow-truck driver and panel beater turned investor is famous for keeping a low profile despite reportedly being New Zealand’s richest person with a personal fortune of between $6 billion and $7 billion.

Unlike the luxury barges preferred by billionaires for lazing around the world’s most glamorous ports, Ulysses, designed by Marin Teknikk, is “very robust and seaworthy” according to Hart.

It’s unlikely to be uncomfortable, boasting accommodation for 60, and the requisite helipad, pools and hot tubs, but it’s more geared toward longer journeys in “rough waters”.

Norwegian boat builder Kleven, which specialises in oil and fishing industry vessels, is calling Ulysses an “expedition support vessel, specially designed for adventurers who would settle for nothing but the most luxurious digs”.

New research has found extreme melting of New Zealand’s glaciers in 2018 was at least ten times more likely due to human-caused global heating, Graham Readfearn reports for The Guardian. Twice a…