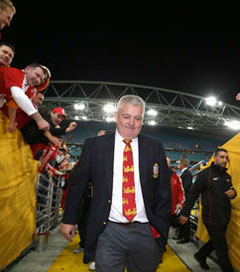 Gatland Rang His Chances and Triumphed

Hamilton-born Warren Gatland “turned a Lions travesty into a triumph” with the team’s 41-16 win over Australia in the third and deciding match, the Lion’s first Test series victory in 16 years. “Only a victory could save [Gatland] from opprobrium after the O’Driscoll furore – and his changes delivered spectacularly,” The Observer’s Eddie Butler wrote. “Gatland, 49, the Lions coach and final selector, made his choice, selecting one of his current Welshmen, [Jonathan] Davies, ahead of [Brian] O’Driscoll, and most of the Ireland that Gatland left in acrimonious circumstances in 2001 seemed ready to bring him to book for the heresy. There was more pre-match pressure on the New Zealander, since most of the pundits, who put memories ahead of form, agreed with the slighted Irish that this was a travesty. Only a victory could possibly save the coach. And since Australia had the momentum going into this decider, Gatland, the old hooker, had most certainly shot himself in the foot, a singularly stupid thing to do because he was already hobbling around on a pair of broken heels, courtesy of falling off a ladder. Now he was about to fall off a cliff. And the drop was going to be even more painful because this was a double-dip decider. Australia had closed a remarkable 19-3 deficit, thanks to a Lions supremacy at the scrummage that had nothing to do with any centres of any nationality, to three points, and the momentum was with them again. In six minutes they had turned the game on its head, James O’Connor, the non-fly-half proving he might yet be one, with a try on the stroke of half-time, and Christian Leali’ifano, as accurate as Leigh Halfpenny, kicking his last pair of penalties at the start of the second period. The Lions coach rang his changes. Off went Adam Jones, he of the scrummage. Off went Mike Phillips, slow of pass but the very symbol of the Lions’ confrontational attitude. The die was cast. And through went the Lions, after a ruck set up by Dan Lydiate, the move blossoming in the hands of Davies and finished by Leigh Halfpenny and Sexton. The original selections and now the replacements had been made and everything had turned out sweetly. Davies had delivered and Gatland had triumphed. To win the Lions had to play together as never before. And in that regard the tenet of submission to the common good was respected, from start to finish, by one and all.”