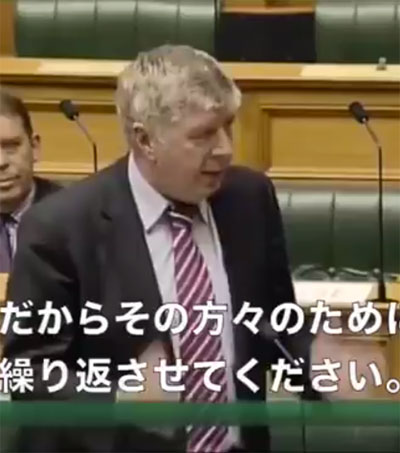 Former MP Maurice Williamson’s rising popularity as a gay icon among many Japanese people is thanks to a video of a speech he made during the third reading and vote on the Marriage Equality Bill in 2013 in Wellington.

The footage seems to have become a battle cry for marriage equality among Japanese social media users.

Some cities in Japan recognise gay partnerships, but same-sex marriage remains illegal in the country.

Williams’ speech resurfaced on Twitter in response to recent comments made by Wataru Takeshita, the General Council Chairman of Japan’s Liberal Democratic Party.

Takeshita has been criticised this week for suggesting that gay partners of state guests should not be allowed to dine with the Emperor or Empress of Japan. He later apologised for his remarks.

One Twitter user posted part of Williamson’s speech with Japanese subtitles and described how it was, “a speech that was admired worldwide at that time.” He dedicated it to, “young people who haven’t heard it.”

In his speech, Williamson says: “All we are doing with this bill is allowing two people who love each other to have that love recognised by way of marriage. That is all we are doing.”

Following the speech New Zealand’s parliament legalised same-sex marriage. It was the first country in the Asia-Pacific region to do so.

Williamson, 66, who is now New Zealand’s Consul-General to the United States has also responded on Twitter to his new found fame with both bemusement and delight.