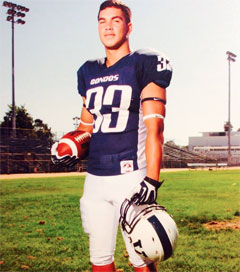 One of the stars of Venice High School’s football team this season is seventeen-year-old New Zealand foreign-exchange student James Cherrington.

Not bad for someone who showed up last January having never played football. Cherrington was a rugby player coming to America to experience a year of Southern California culture.

“I love it. There’s nothing like it,” he said of his football experience.

He’s scheduled to return to New Zealand in January, but would love to come back to the US, where could be a college football prospect.

When the gifted young player tried to put on a jersey and shoulder pads for the first time, he said, “I didn’t know what I was doing.”

Now he might be one of the best defensive ends in the Los Angeles City Section Division, and he’s going to have lots of stories to tell in New Zealand.