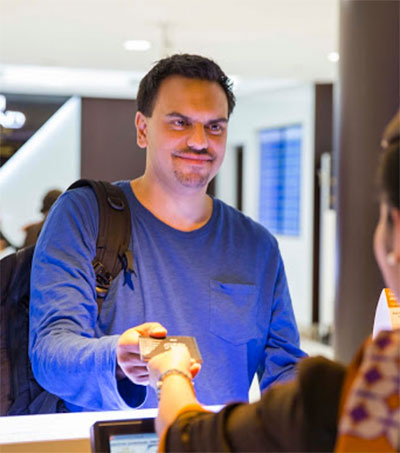 New Zealander Andrew Fisher, 42, who works in Abu Dhabi as Etihad’s vice president of fleet planning, has broken the world record for flying around the world in the shortest time on scheduled commercial flights, circling the globe in less than 53 hours.

Fifty-two hours, 34 minutes to be exact.

During his trip, Fisher, who has worked at Etihad for 11 years, updated his twitter-feed with details of his route, including photos of his travel path and selfies with crew.

Fisher started his journey on an Air New Zealand flight from Shanghai to Auckland, before continuing with the airline to Buenos Aires. He then switched to Dutch carrier KLM to fly to Amsterdam, before finishing his trip back where he started flying China Eastern to Shanghai.

This wasn’t a spur-of-the-moment trip. A self-proclaimed “aviation geek”, Fisher has dreamed of attempting the journey for the last 20 years.

“I have had a passion for aviation from when I was a kid and used to spend hours as a teenager reviewing airline route networks and timetables,” Fisher said. “When I saw this world record category existed I immediately felt I could beat it.”

Fisher says he was surprised to find out how much attention his journey had been given: “It was one of the top seven travel trending topics in China and had over 3.5 million views.”