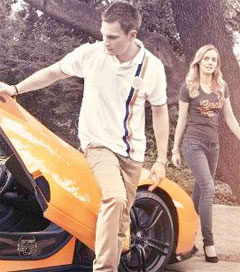 Drive Your McLaren Supercar in Retro-Chic

From the world of Formula One and Can-Am racing, to road-going supercars like the 3-passenger F1 and current MP4-12C, New Zealand-founded McLaren has been amongst the world’s best for five decades, Nick Kurczewski writes for New York Daily News. “The company is celebrating 50 years of being in the business of high-performance with this limited run of retro-chic merchandise.”

“While McLaren is based in Britain, it was a Kiwi who founded the firm. New Zealand-born racing driver Bruce McLaren started the outfit that still bears his name back in 1963.

“Despite the loss of McLaren in a tragic racing accident in 1970, the team carried on and went from strength to strength, scoring numerous racing wins and championships.

Do you need to look extra fashionable when exiting a McLaren MP4-12C supercar? Well, maybe not … but a little automotive accessorisation never hurt anybody.

“Available online for a limited time, our top pick might be the gold-colored tee with McLaren’s F1 multi race-winning 1968 M7A racecar emblazoned on it.”