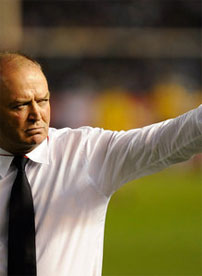 “Mention the words rest, reconditioning and Rugby World Cup in the same sentence to New Zealanders, and they are likely to break out in a cold sweat,” New York Times reporter Emma Stoney writes. “In a country where rugby is king, no one has forgotten, and very few people have forgiven, New Zealand coach Graham Henry for the controversial decision in 27 to withdraw 22 leading All Black players from the first seven weeks of the Super 14 competition before the World Cup in France. It was a harsh lesson to have learned, but Henry, a former school headmaster, has certainly done that. The man who was the architect of New Zealand’s conditioning plan in 27, Graham Lowe, is now the Scottish Rugby Union’s director of performance. And perhaps surprisingly, given the backlash after New Zealand’s failure four years ago, he has backed a move by Scotland coach Andy Robinson to withdraw five of his key World Cup players from their club duties in the lead-up to the tournament this year in New Zealand, which begins September 9.”