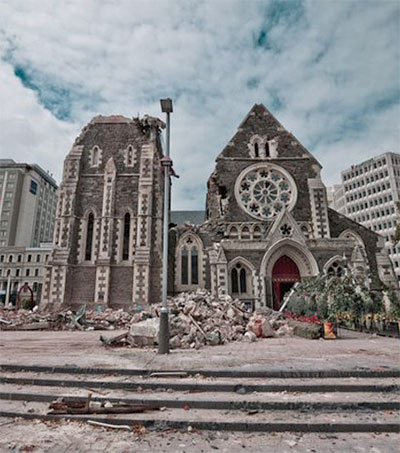 Contemplating the Rebuilding of Christchurch Cathedral

“Henry John Chitty Harper was the first bishop of Christchurch. He battled to build the Anglican cathedral that, for more than a century, was the city’s centrepiece, its greatest landmark and an inspiration behind its logo,” Harper’s great-great-great grandson Phillip Reeves writes in a blog for America’s National Public Radio (NPR).

“For decades, Bishop Harper worked to raise funds for the cathedral, every year donating a sizeable chunk of his income. On a rainy summer’s day in 1864, he laid the foundation stone.

“On 22 February 2011, Christchurch and the surrounding area was hit by a ferocious earthquake that claimed 185 lives, and wrecked thousands of homes and businesses. The cathedral’s spire came crashing down. Since then the church has been shut, occupied only by a congregation of pigeons roosting in the rafters.

“Not long ago, I visited Christchurch for the first time since going there as a student in the mid-1970s to stay with my grandparents.

“Until I arrived, though, I had no idea of the scale of the damage, or of the enduring mental scars caused by these disasters. Despite lingering trauma, post-quake Christchurch radiates a certain degree of defiant optimism.

“This contrasts strikingly with the sad hush that engulfs the battered cathedral. It’s deconsecrated and in limbo, paralysed by a dispute over its fate.

“In March, a proposal drafted by a top New Zealand architect encouraged some to hope that a solution might be emerging. It’s a plan to rebuild the cathedral with a modern wooden interior, dramatically reducing the weight of the building; the exterior would resemble the Neo-Gothic original.

“The Anglican authorities appear to be leaning in favour, but there are plenty of critics of the plan, and the argument likely will run on.

“It’s clearly up to the people of Christchurch to decide the fate of their cathedral. What business is it of mine? But I guess it would be nice if enough was preserved to ensure that great-great-great grandfather Harper’s efforts do not, after all these decades, come to nought.”