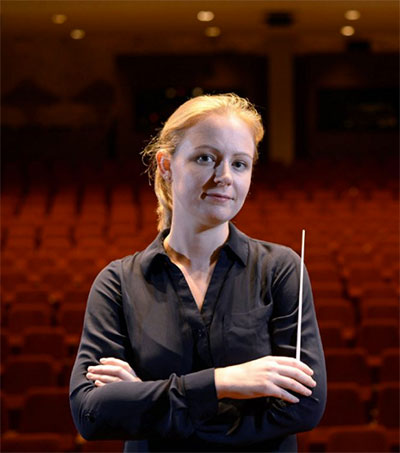 American piano virtuoso Conrad Tao was on the programme with the Berkeley Symphony Orchestra and guest conductor New Zealander Gemma New not once but twice – playing Rachmaninoff’s Paganini Variations on the first half and returning after intermission for Liszt’s equally extravagant showpiece “Totentanz”.

“New, [who has] posts in Ontario and St. Louis, made a solid and responsive partner. In an impressive local debut, she demonstrated a crisp and vivid podium technique complemented by a canny mastery of orchestral balance,” San Francisco Chronicle music critic Joshua Kosman writes.

“Those gifts were brought into play in the West Coast premieres of two recent works, beginning with ‘Chasing Light,’ a brief and perhaps overly modest curtain-raiser by Rene Orth. The piece is described by the composer as an evocation of the experience of struggling to meet a deadline and finally succeeding – a slice of human experience that is presumably relatable for many if not most of her listeners.”

New graduated from the University of Canterbury with a degree in physics and violin performance. She also holds a Master of Music degree in orchestral conducting from the Peabody Institute in Baltimore.