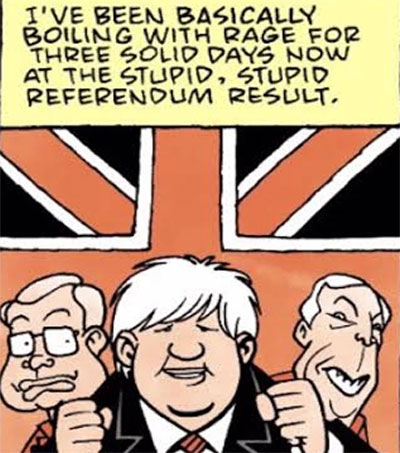 For days, Roger Langridge wrote, he was boiling with rage over the United Kingdom’s “stupid, stupid referendum result.” But then someone wrote to ask him: “Why do you hate your countrymen?” And so the New Zealand-born artist, who lives in Britain, decided to respond not with hate, but love. Michael Cavna investigates for the Washington Post column Comic Riffs.

What could an ordinary, loving UK resident do? “Watch out for your friends, your neighbours, your loved ones if they’re not English or white,” wrote Langridge, the acclaimed writer-illustrator (Fred the Clown, Muppet Show and Popeye comics), in a cartoon he created in response to the Brexit vote.

“I live in multicultural London and I’m white, and I’m still terrified,” Langridge tells the Post, “because I’m a foreigner with a foreign accent, and my wife and kids are French, and I keep hearing how even British-born people who don’t fit certain preconceived notions of Britishness are being openly harassed in shops and on buses and told to ‘go back where you came from,’ because apparently that’s okay now.”

Comic Riffs caught up with Langridge – who has been nominated for Eisner, Harvey, Reuben and Ignatz awards for his work with comics – to talk about how he views the land of his residence, in the short- and long-term, in the wake of the UK’s vote to leave the European Union.

“For me, carrying on writing light, frothy kids’ comics as if nothing had happened wasn’t an option,” Langridge said. “It’s almost as if everybody’s going through the stages of grief right now. I suspect the talk of Article 50 never being triggered falls smack in the middle of the ‘denial’ stage, though of course I’d like to be wrong about that. But I have seen a lot of talk on social media among cartoonists I follow about ‘what we can do.’ We’re all trying to find something constructive to offer rather than give in to despair, which is as healthy and positive as anything I’ve seen come out of this shambles.

“I suppose, through art, we can communicate things that need communicating to a much wider audience than if we didn’t have that outlet. That’s got to be worth something. To tell people who are as frightened and angry as I am that they’re not alone; I think that has value.

“More than that, I’m still trying to figure out.”