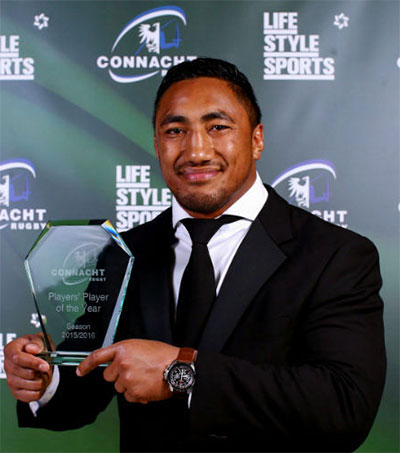 Connacht veteran John Muldoon says the acclaim for Aki came as no surprise and he told the province’s rivals to brace themselves for even better to come, whatever efforts they might go to try and nullify his impact.

“He pushes himself in training every day. Not alone has the team’s skills got better but Bundee’s skills have definitely got better over the last while,” Muldoon said.

“I think he’s always striving to get better and that’s the mark of the person that he is and he’s constantly pushing the young lads around him to get better.”

Aki told guests at the Guinness ceremony that his award was for his team but Muldoon, recognised for his leadership and 13 years in the Connacht back row, said the New Zealander was deserving of the honour.

“He’s been absolutely phenomenal. He was very humble on the stage, praising everyone bar himself but look, he’s been very, very good. He came with a big reputation and you could understand why Leinster and Munster were disappointed not to sign him. He’s been exceptional.”

Aki’s rise to prominence has not gone unnoticed in his homeland, with double World Cup-winning New Zealand captain Richie McCaw saying the Connacht star should return to play for the All Blacks.

“The fact that they’re trying to get him back is huge,” Muldoon, a distant relative of former primer minister Robert Muldoon, said.