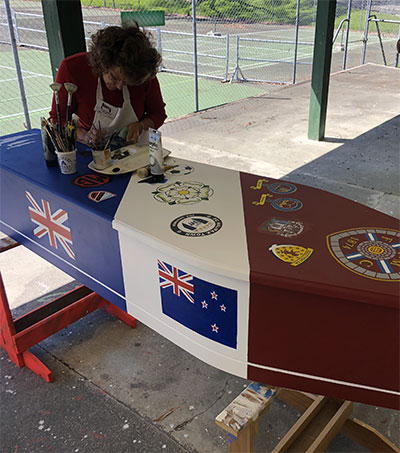 Across New Zealand, a country of almost 5 million, five major groups like the one Judith Aitken joined in Hastings have sprung up in recent years for people wanting to build and customise their caskets. They’re called coffin clubs, and members have a range of motivations, from thumbing a nose at death to warding off loneliness to cutting funeral costs. The Washington Post investigates the trend.

“Why spend $5000 on a coffin and go out ordinary, when you can spend $500 and go out fabulous?” Aitken, an administrative assistant for an insurance broker, said to Washington Post foreign affairs reporter Rick Noack who visited the Hastings club recently.

The clubs usually charge a fee to join. Members can then choose from among various coffin designs and sizes costing about $250 to more than $500.

After a former palliative care nurse launched the first club in Rotorua in 2010, the “Makers of Fine, Affordable Underground Furniture”, as they describe themselves, have inspired thousands. The movement has generated spinoffs in other countries, including Australia and the United States, but nowhere else has it gone so mainstream.

Hundreds of coffins have been produced by clubs like this over the past nine years. Life may have limits, but creativity doesn’t, it appears: From a go-kart to a red mini-tram, there’s nothing that can’t inspire a coffin in New Zealand.

Like many Western countries, New Zealand has a rapidly aging population and a raft of related social problems, including the negative effects on health, wellbeing and mortality of living alone. A 2017 study by the University of Otago found that about one-fifth of all frail, elderly New Zealanders self-identified as feeling lonely, based on a large-scale government assessment of 72,000 people.

Outside the club building, Aitken said she was almost done for the day with work on her husband’s coffin. Hers was already finished, she said. On it she had painted a panoramic view of a fictional city that includes landmarks from places she has visited, including Big Ben in London, the Colosseum in Rome and the Eiffel Tower in Paris.

She’d left a “little gap,” though, Aitken said with a smile, because who knows what might still happen?