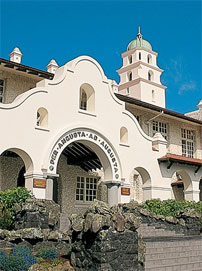 Buying Up the Grammar Zone

The campus of Auckland Grammar School, designed in the Spanish style of the California missions, is one of New Zealand’s largest, oldest and most prestigious schools for boys, established in 1868. By law, most of its students must live in the area, which Aucklanders call Grammar Zone. And having “GZ” in a real estate ad definitely gets attention from prospective buyers and is credited with significantly giving a boost to sale values. The suburb, a real estate agent said, is popular with the wealthy Asian immigrants who have been coming to New Zealand in increasing numbers in recent years, particularly with Chinese. “The school, probably, for the Chinese, is the priority,” said George Fong, who moved to New Zealand from China in 1990. Fong said wealthier Chinese buyers consider Epsom to be good value. “You buy here for one million dollars; in Hong Kong, you only buy a two-bedroom apartment. In Hong Kong you’ve got no garden at all. Here, you get 400 square metres; they think it’s luxury.”